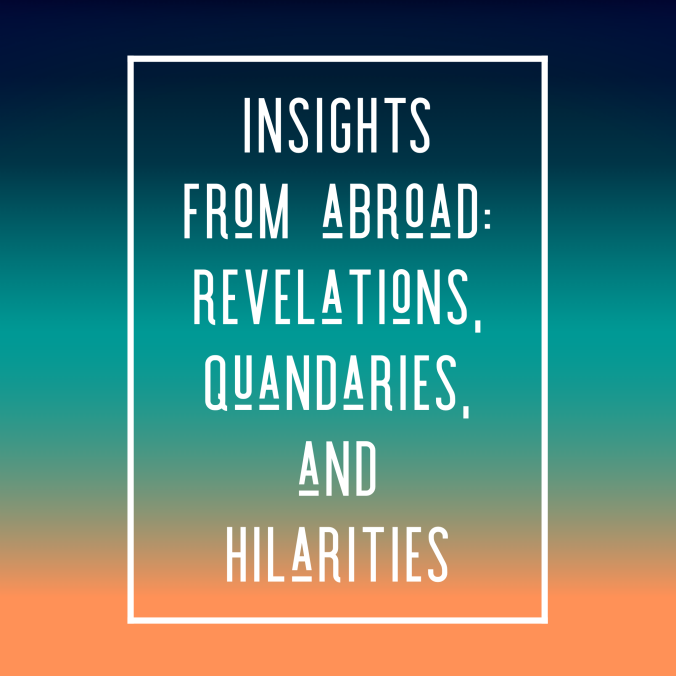 One too many meltdowns in the last month had Ben and I hell bent on finding a playground for our kids to just run, without risk of being hit by a car/donkey/bajaj/motorcycle or just simply losing them into an unmarked abyss on the sidewalk.

After consulting the guidebook, Father Ubald’s niece directed us to a little place called Bambino Supercity. Her younger sister liked playing there and it’s where all the cool Kigali parents take their kids for entertainment, so what did we have to lose? They had a pool, a restaurant and a playground. Sounded like a trifecta of fun if you ask me. We packed our suits and headed out for a little afternoon of lunch and carefree, unstructured playtime.

So. I thought I was winning this summer by missing the county fair. I know, I know. The fair is nostalgic and patriotic and there is something special about smelling seeing the fattest pig. But I don’t have much confidence in the ride “technicians.” I mean, how do I know they were properly trained to put those things together? Is there an inspection process? Are there safety procedures for would-be malfunctions? One missing piece and my child could be flung into orbit in one of those rusty metal cages, their only companions likely to be tetanus or MRSA or maybe some lice clinging to the frayed harnesses. And who doesn’t love spending their life savings on reconstituted lemonade and deep-fried doughnuts? At least the deep fryer probably kills all the salmonella.

As I was saying. I thought I had cashed out on the fair this year.

Until we got to Bambino.

Imagine all the old fair rides from the days of yore (like, from the 80s), cast into a junk lot due to improper upkeep.

That’s it. Just imagine that, and that is the Bambino “playground.”

But like, our kids can’t unsee something like that, and so, with their squeals of delight, we were committed. I said a sweet-Jesus-have-mercy-on-us prayer and released my precious littles into the hands of the Bambino ride “technicians.”

We walked down the dirt path, past the “pond” (a pit of about 6 inches of green/brown slimewater with some little boats far from their glory days, waiting to take would-be sea captains on a voyage across the murky depths) and straight to the white ticket booth to pay for our shot at taunting death. 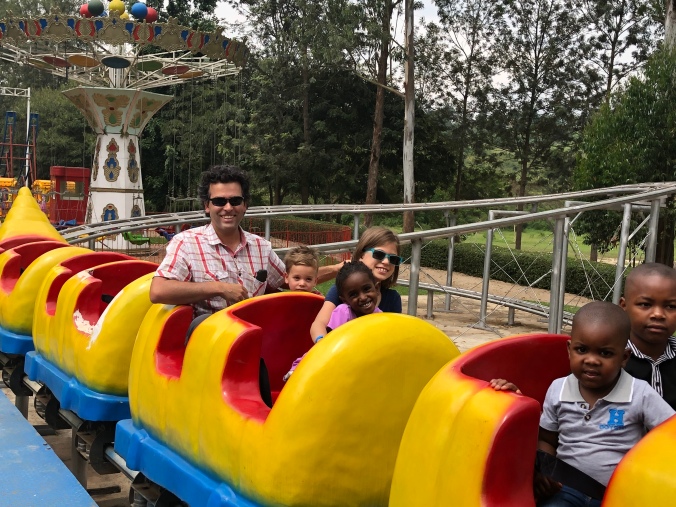 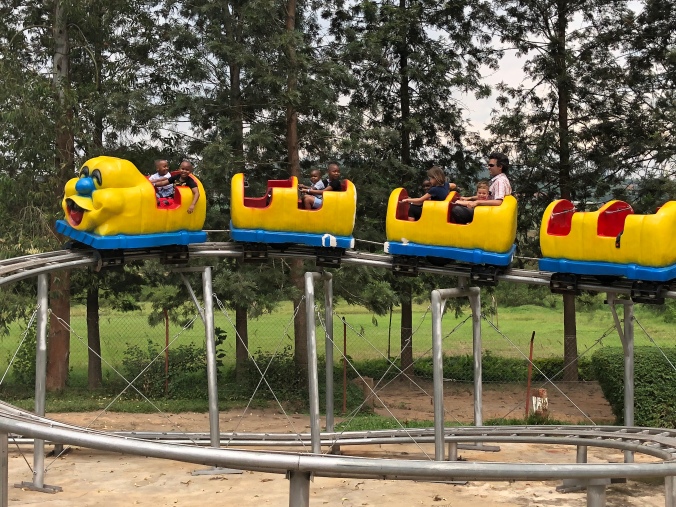 I was tickled to see that no one died on the first ride, a mini train roller coaster. And so I agreed to participate in one ride: the swings that just go around in circles. It should be noted that I am extremely prone to motion sickness but, hey, it was for the kids. Also, this way if they did get flung into orbit I might have a fighting chance at snatching them out of thin air if I was sitting next to them. Mom reasoning makes complete sense.

The seatbelts had seen a day or two, and most of them had lost their actual buckles. No matter. The technician just TIED THEM AROUND MY CHILDREN. I sat next to my littlest and held her hand, partly to keep me from barfing and party to keep her from dying. And wouldn’t you know it, half way through the puke propellor, her seatbelt came undone. No bar, no strap, just good old gravity (and hopefully an angel or two) holding her into place. Ok, then, we’ll just hold that across you there. AS THOUGH MY HOLDING A SEATBELT ACROSS HER TINY BODY WOULD IN ANY WAY PROTECT HER should she be flung forth into the wild blue yonder. I cast my nicest daggers possible at the technician to kindly stop the death centrifuge STAT. I couldn’t tell if he was amused by or just oblivious to my suffering, but either way he finally seemed to get the memo and we all descended back to the safety of firm ground.

Anyhow. This went on for several hours. My endorphins were getting a great workout.

One kid in particular could not be wooed by lunch or even the pool, only wanting more rides. This was his moment and he was going to milk it for all it was worth. And so, we rode. And rode. And rode. He had to do all of them. Until there was one left. One I was hoping he hadn’t seen. But you know he had.

It was a car that went back and forth on a semicircle axis. I assumed it was totally broken down, as the cable holding one car was completely snapped off and the cable on the second car was held together with ELECTRICAL TAPE. But nope, cars 3 and 4 were apparently fully functioning and so, into number 4 we went. My little dude and I sat facing each other, the car swinging on a pendulum (and a prayer), ever higher. My attempt at a brave face for this ride was not unlike Branch’s attempt at laughing and if you don’t know who Branch is, you don’t hang out with kids enough.

After what seemed like way too many minutes the car slowed to a halt (again, my pleading glances did little to stop the ride quickly), Graham chattering all the while about how great it was. We had even seen a camel in the field next to us, and I’ll be honest, that was kind of cool.

“And Mommy,” he said matter-of-factly, “It wasn’t even horrible.”

That may be true in your world, bud.

You know what else is true? Our kids played hard and ran freely and slept well and the fact that this is normal at home and not an exception is a privilege that is not lost on me.

Also. You know what else is true? I still don’t have to go to the fair this year. And in my world, that is the exact opposite of horrible.

2 thoughts on “Insights From Abroad: Revelations, Quandaries, and Hilarities, Episode 3”

Life is so many things: weird and funny and awkward and hard and joy-filled. Mine is a work-in-progress and I’m writing about it in all it’s unkempt glory right here on this blog.

Also, if you must know, I have strong opinions about 80s music, man-buns, and all the curries. Big earrings make me swoon. So do people who are brave with abandon.